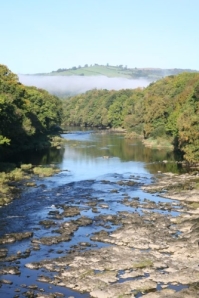 Beginning at the Erwood Station Craft Centre, cross the road and take the gravel road opposite, this leads to Oak Villa farm on the right. Follow the path up a gentle incline and continue ahead as far as Nelfa farm on the left. Do NOT go into the farm, but at the telegraph pole on the right is a small path leading down to a waterfall in a pretty dingle.

German 10.5 cm 98/09 field howitzer. On top of Twyn y Garth, a hill overlooking Erwood in Wales. It was mounted on the site in 1920 and has now been renovated by Painscastle Community Council, through funding from Powys County Council. (Photo credit: Wikipedia)

From the Erwood Station Craft Centre turn right and continue ahead for 300 yards to the Painscastle road (B4594) as far as the second bend, then just past Sunnybank Cottages turn right and follow the path (SP) Ty Isaf Farm to the first gate.

Just before the second farm gate keep to the path on the left along the hedge, following the old Postman’s route and cross the field. This path joins the track to Garth Farm and leads up to the mound and the cannon which overlooks Erwood village. The story is told that the old cannon was captured by the locals and taken to Aberedw, but it was stolen from there by night and erected on the hill pointing across to Erwood where it is today.

Follow the road in the direction of Painscastle, and then just before the Llandeilo Graban junction take the minor road leading to Garth Farm. Continue on this road past the Old School House and then as far as the second farm which painted a bright orange. At this point go between the farm and the cottage on the right. Here is a gate leading up to the cannon with fine views of Erwood village from the top of the hill.

From here retrace your steps to Garth and follow the road past Garth Old School House as far as the next junction. Turn left and follow the B4594 down through the bends to the minor road ahead. Turn right onto the B4567 and return to the Erwood Station Craft Centre.

Terrain: Along a well-defined but sometimes overgrown path

This walk was once part of the old Drover’s route and is now rather overgrown and occasionally becomes difficult to negotiate.

At the Erwood Station Craft Centre entrance take a right turn along the B4594 towards Painscastle. Follow this road to the FIRST bend, taking the footpath on the right which leads to the Skreen. Go past the signpost on the right and take the left footpath which runs parallel to the road just below.

The path is clearly visible even though it becomes narrow and is partly blocked by a steep barrier of stones. There are views across the valley to Erwood village and the River Wye.

If it is difficult to negotiate due to overgrown weeds retrace your steps and continue back to the Skeen.

Turn left onto the B4594 Painscastle road and continue to the junction at the bottom of the hill. Here turn right onto the B4567 and retrace your steps to the starting point at Erwood Station Craft Centre. 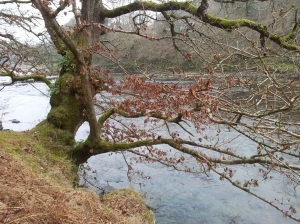 View from the Riverside walk in winter

Terrain: A pleasant woodland walk beside the river and partly on the road. However, it is very narrow in places (30cm wide), has many exposed tree roots, and has some moderate slopes which could be a hazard to some users.

Start at the Erwood Station Craft Centre itself, where the walk is marked from the car park and picnic area. The path goes down through the trees and eventually meanders to the river bank. Here is an open area where there are some very flat stones worn smooth by the water and visible when the river is low; there are fine views along the River Wye in either direction. The path continues along the river bank through the trees until you reach a signpost pointing up some steps. Go across the field to the gate which leads to the road, and from here take a right turn and follow the road back to Erwood Station Craft Centre.

Terrain: Walk with some gradients (good views of the valley)

At the entrance of Erwood Station Craft Centre turn left, and continue along the road as far as the cattle grid. Just before the cattle grid take the road on the right. Follow this up a steep incline then bear right past the trees. Continue to the junction, then right to Pentre Caeau Farm.

Continue on this road, keeping a small pool on the right, until you reach a farm gate. Leave the road here and follow the footpath, taking the first left, until you reach the Garreg Fawr rock on the right. Follow this path until it joins a gravel road then turn right. Continue as far as the minor road ahead, then turn right again and return to the starting point at Erwood Station Craft Centre.

Terrain: A short walk mainly along the road

From Erwood Station Craft Centre picnic area follow the Boughrood road (SP) over the cattle grid and continue on this road for a mile until you come to an iron bridge over a stream (along this road the stone supports of the old bridge, which went over the railway, are still visible). On top of the hill above you, about 1,000 feet up, is the site of an ancient earthworks, and an old German field gun (see photo, Walk 2)

At the way marked sign on the left go over the stile and follow the path going under the viaduct. Follow this path beside the river for about a mile through some fields – closing the gates behind you – until the path bears left through a gate onto the road. Go left here and follow the road along the old railway line back to Erwood Station Craft Centre.

Duration: 2 hours to Aberedw, a 4 hour walk in all. (Or short walk from Aberedw)

Terrain: The common is rugged and hilly, with a few steep sections which could be a hazard to some users.

If starting at the Erwood Station Craft Centre take the road on the right, opposite the entrance. Follow this path up the incline for a short distance, past Oak Villa, and then bear left following the footpath along the hillside; the path skirts the Garreg Fawr rocks then forks left. Go right and through a farm gate on the minor road which leads to Llandeilo Graban. Turn left and, keeping the pool on your left, follow the road to Pentre Caeau Farm. At the bend just past the farm take track to the right ahead and continue for about two miles as far as a derelict farm, and turn left onto a gravel farm road.

Continue for a short distance as far as a farm gate on the left. Take the path into the field, and cross the field as far as some trees, where there is a little wooden gate on the left. Here in the bushes is the six foot square cave where Llywelyn, the last Prince of Wales, is claimed to have hidden from his pursuers in 1282, before being killed at Cilmery, near Builth Wells.

From here go back to the gravel road through a farm gate, and then left. Follow this road to the junction, then left again into Aberedw village. Don’t miss the church and the Seven Stars inn, where poems written by the locals once decorated the walls. Continue through the village to the junction, then turn left onto the B4567 for about two miles back to Erwood Station Craft Centre.

If starting from Aberedw, turn out of Erwood Station Craft Centre and turn right into the village up the hill, keeping on this road as far as the bridge over the River Edw. Park at the junction or in the village itself, and about 50 yards further on there is a lane and farm gate. Go though the gate and continue along until you reach an open field on the right. There in the far corner, on the left-hand side, among the trees, is the cave of Llywelyn.

Error: Twitter did not respond. Please wait a few minutes and refresh this page.